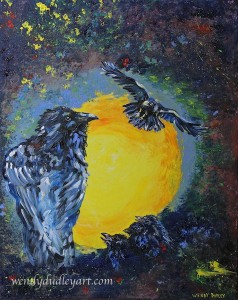 Have you ever wondered what it would be like to be a baby bird, nestled deep inside your nest, staring up at the passing blue sky and bright sun? And then to have parent birds fly down, towards your gaping beak, as they arrive head-first. What a view from your circular world, built of moss, leaves and twigs, cradled in the branches of a towering tree. This is the feeling I sought to convey in From Inside The Raven’s Nest, the outer dark edges of the nest circular and open to the rising morning sun and pale blue sky. I was inspired to do this painting earlier this week, while watching ravens somersault through the blue, their groaking filling the valley in which I live. If you call out to them, they do answer.

If interested in this painting, please email me at dudleyart1@gmail.com 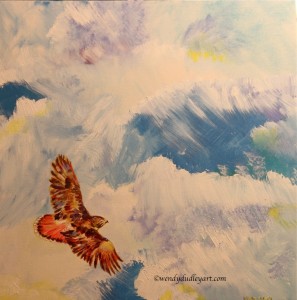 For some reason, we as a species find it necessary to label, categorize and to define within boxes. I work hard not to do this. I prefer to exist as is, defined more by my life experiences and natural evolution as I move along the life spectrum. And so, when it comes to beliefs, I cannot tell you what I am in a single word. As in an animist, a pantheist, a Buddhist, a Christian, or a pagan? I can only share my beliefs, and let them stand as is. I express myself through my words and art, so within each you will find a blend, a meeting of diverse wisdoms, a coming together of various stories, whether told by the skies, the ancients or medicine souls. What I can say is that I am attracted to the primal. As in the Old Age, which of course is carried into the new age by those who apply the teachings of the past. So while the Dalai Lama sharing a canvas with Turtle Island, shamanism, transformation, and the celestial may be to some a curious combination, it actually tells the story of how different beliefs share a common path. We may come from different directions, but we all seek a compassionate destination. 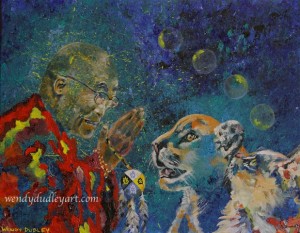