MIS AMIGOS
While I can have an idea of where I want a painting to go, it often takes a different direction.   Such was the case with Mis Amigos. It began with three donkeys, and a woman carrying a bucket. But as it took form, I added another donkey, and then thought, “Hey, I have four donkeys of my own. I will paint them to represent my little herd, thus a mousey-grey, a pinto, a blue roan and a dark brown/black. And then the woman became my reflection. I never carry a bucket to bring them in; I usually show up in the field and they follow. And I always have a walking stick (gentle on the hips, at this age!). Occasionally, I may go out with my rope halter, so I portrayed myself as such. I thought I was done, but something was bothering me. Where was Miss Lucy, my red-headed misfit mule? I could not do a painting without her. It would haunt me. And so I gave her the rightful spot, off the trail and to the side, taking in the viewer. This is exactly what Lucy would do, always attentive to something or somebody new, and always blazing her own path.
And so, this painting evolved into a self portrait of sorts. This is exactly the order in which they march in, little Peso always at the back somewhere. And thus it was fitting that this painting be blessed with a simple title, Mis Amigos. 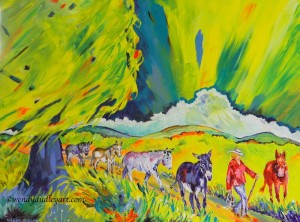