Smarty Jones. Big Brown. California Chrome. I put money down on all of them, with the hope I would have a souvenir ticket stub from a Triple Crown winner. It was not to be. And this year I was too busy to bet. Of course, as luck would have it, we came up with a champion, 37 years after Affirmed won the coveted prize in 1978.

Watching the race was to witness beauty. A perfect ride. A clean and decisive wire-to-wire win with jockey Victor Espinoza. I knew right then I had to paint this horse, this bay thoroughbred colt with the faint star on his forehead. This personable horse named American Pharoah. He would be bold, strong and muscled with passion. He would be out front, with Frozen and Keen Ice coming from behind (they placed second and third, respectively). And he would be almost larger than life, so confident and so strong, there is no question that AP will be first to break the beams at the finish line.

In a back story, this painting is also a nod to a grandfather I never met. He was a jockey, and in those days he would jog while wearing a huge plastic bag over his running gear; this would cause him to sweat profusely, keeping his weight down. My mother has fond and vivid memories of spending afternoons at the track, while her father rode the horses. His name was Victor Jenkins. Another Victor. Horse racing has its own subculture, and in those days it was rife with alcoholism and womanizing and questionable tactics. I don’t know how my grandfather fit into this unique world, but I do know he spent a lot of time racing in Cuba. Of course, he has long since departed, and I have been told he is buried somewhere in Massachusetts. 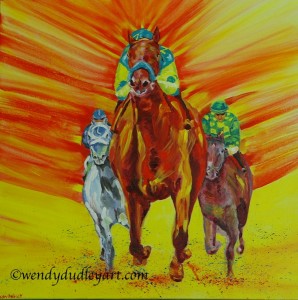